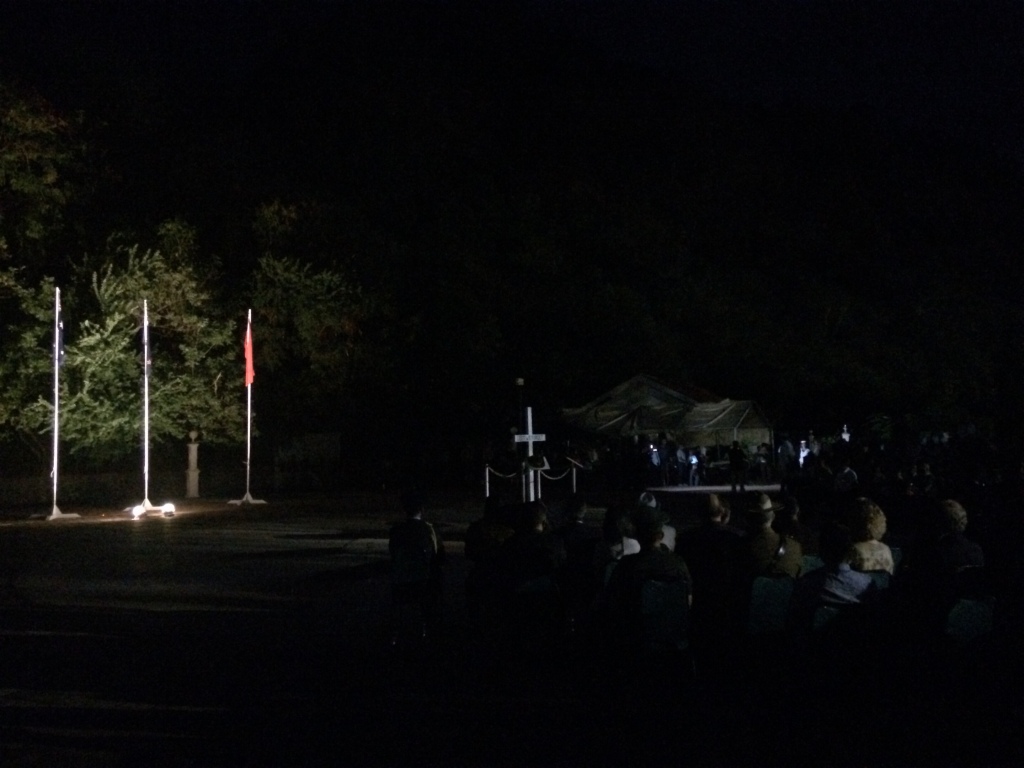 Didgeridoo and clapping sticks played by Australian soldiers in the dark – it feels appropriate. It indicates the solemn tone of the ceremony to follow, not a parade ground of military strength. 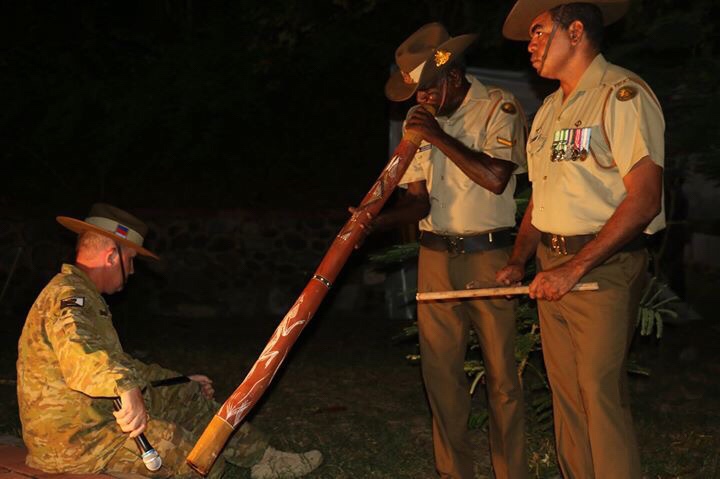 Anzac day service was held in the early morning.  Several hundred people sat together quietly and shared the dawn.  Whilst waiting for the Timor-Leste Prime Minister to arrive.  With his media entourage.

The Australian and NZ diplomatic and military representatives reflected on loss; the initial speaker recounted the slaughter and confusion at Gallipoli.

As the dawn is even now about to pierce the night, so let their memories inspire us to work for the coming of the new light. CMDR G Turner, RAN

Poignant as Timor-Leste has so very recently emerged from the dark places of occupation, and puzzling, as dawn had pierced the night earlier in the morning.

I reflected on the wastefulness of war – so many dead, so many killed. I see no glory in this construct, just extreme violence and loss, removed from the politicians and leaders who order it.

This land has seen more suffering and violence than most: 400 years under Portugal, the Rebellion of Manufahi, the WW2 Battle of Timor,  the brutal invasion by Indonesia, and subsequent Indonesian occupation, genocide, the 1999 crisis, and the blood soaked withdrawal, then it was the UN time, the 2006 crisis, and finally relative peace.  It seemed self absorbed to be in a place that has had to be so resilient for so long, remembering a battle far away and long ago.  But then again, Timor has lived conflict, Australians have participated in some of them, so maybe the ceremony was better understood in this setting than it might be elsewhere.

As was the case in Gallipoli, the WW2 Battle of Timor in which my grandfather was killed, was poorly planned, under resourced, and a terrible, stupid waste of life.   He was 30 years old.  I imagine he enlisted into the 2/40th, along with other young Tasmanian pastoralists, with the intent to be honourable, be brave, do the right thing.  In this aspect I have no doubt that he excelled.  My grandfather’s battalion was criminally under resourced and under supported, which resulted in a sickening number of Tasmanian farmers slowly dying on the Burma Railway after they were captured in Timor.

Those heroes that shed their blood and lost their lives, You are now lying in the soil of a friendly country.  Therefore rest in peace. There is no difference between the Johnnies and the Mehmets to us where they lie side by side here in this country of ours.  You, the mothers, who sent their sons from far away countries, wipe away your tears.  Your sons are now lying in our bosom and are in peace.  After having lost their lives on this land they have become our sons as well.  Ataturk’s tribute 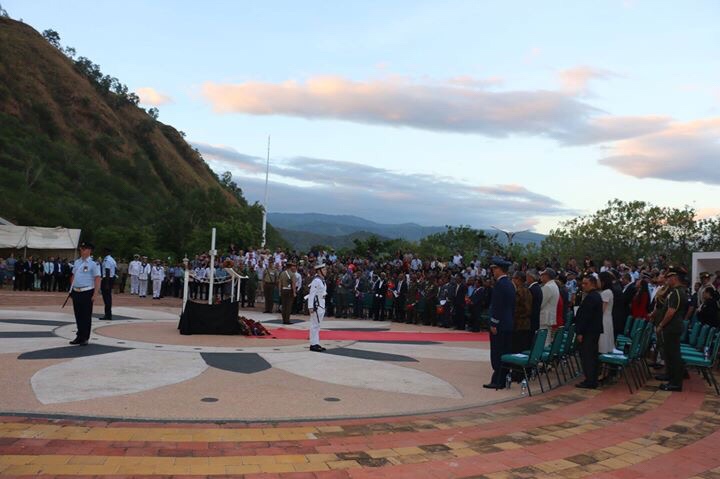 It saddens me deeply that people kill and are killed for politics, for nationalist expansion, for/by old men who make decisions about the lives of people who they will never meet. 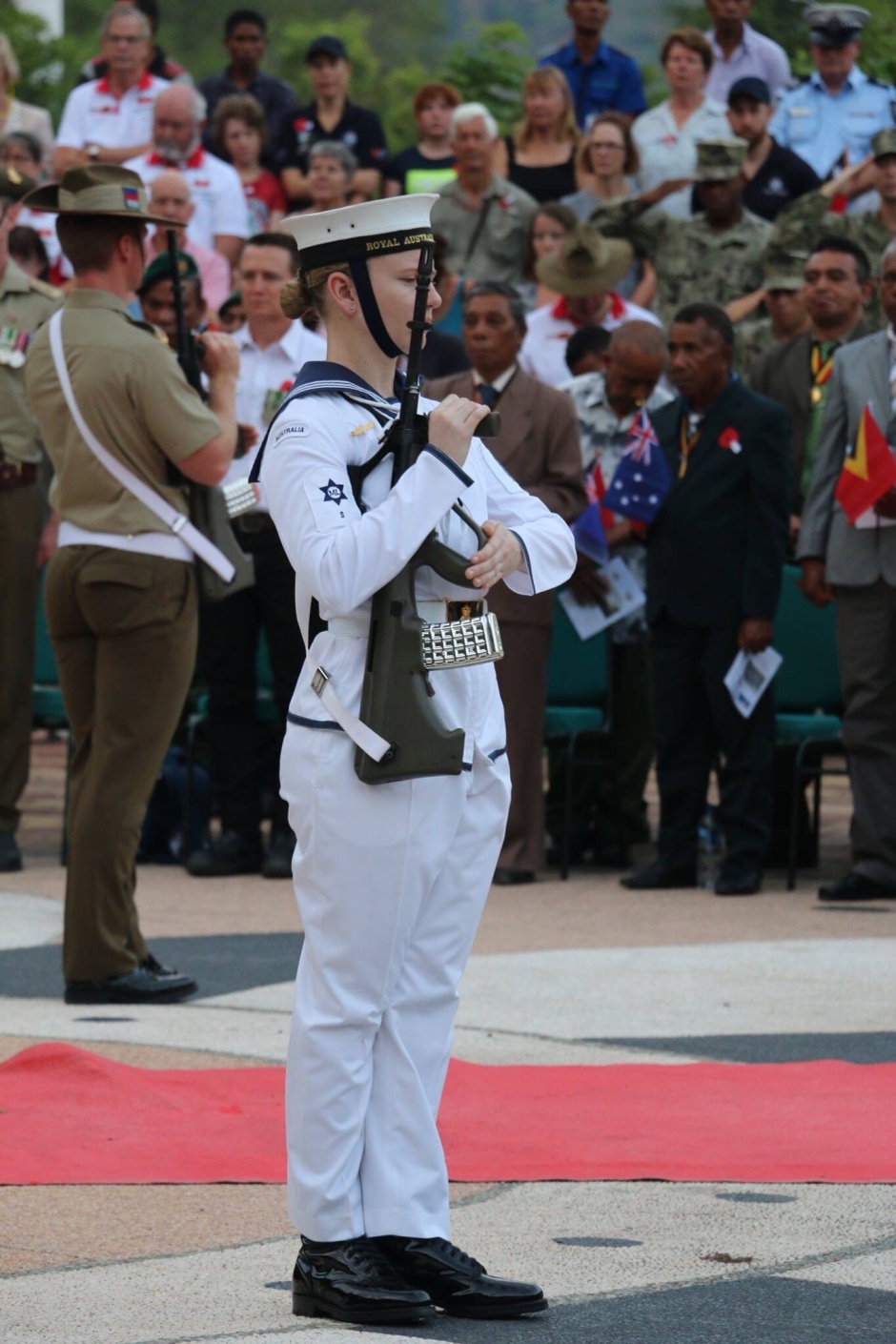